On the one hand, tradition…

Pastéis de Nata, also known as Pastéis de Belém*, are one of the most beloved pastries in Portugal. A buttery, flakey crust filled with smooth, sweet custard and toasted to golden perfection, then sprinkled with cinnamon or powdered sugar… they’ve got a lot going for them.

The portuguese affectionately call these pastries “Natas”, and–in general–agree that the monks at the monastery in Belém were the first to make them. The Pastéis de Belém pastry shop next to the Mosteiro de Jerónimos still uses the original recipe, which is a well-guarded secret. Apparently, the shop swears head chefes to secrecy before they hire them. Every day, this one shop makes hundreds of pasteis. They crank out tray after tray for the mob (literally!) of people waiting outside.

Eat these pastries in their ancestral home for a cultural experience. You’ll observe first-hand the very Latin take on the on the concept of a queue (that’s a line, for us Americans). You can savour the warm pastries inside the beautifully tiled café or at the park in front of the shop…

If you’re in Belém and not in a hurry, don’t miss The Original Pastéis de Nata.

On the other hand…

If you just want to experience the perfect Pastel de Nata, and get a glimpse of how they’re made, then the Fabrica das Natas in the Praça dos Restauradores can’t be beat. In fact, recent guests did a rigorous taste-test (ha!) and declared these pastéis de nata “better than the ones Belém”.

The shop is full of beautiful azulejo murals of old Lisbon, in tradicional blue and white. The effect–with the matching blue upholstery–is charming, although slightly Disney-fied: empty pastry tins fly around the ceiling on a track.

Also, the glassed-in kitchen, which lets customers see the pasteis being put together, is a nice touch. And there’s no denying that the pastries are absolutely delicious.

But don’t take my word for it, do your own taste test… Which pastéis de nata do YOU think are the best?

* The name “Pastéis de Belém” is actually trademarked, and belongs to the Fabrica dos Pasteis de Belem pastry shop. People don’t always pay attention to such things in conversation, however.

Posted in What to eat, Where to eat
Leave a comment 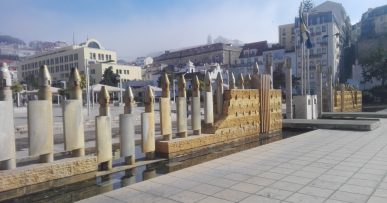 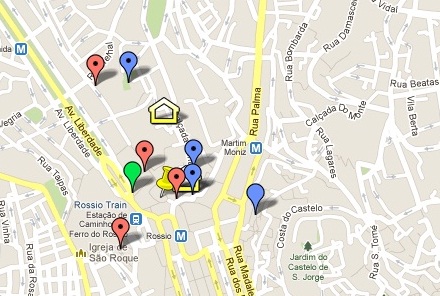 Where should we eat in Lisbon?